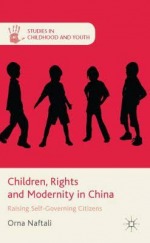 A timely, original study of the emergence of a new type of thinking about children and their rights in contemporary urban China, which draws on diverse evidence from Chinese government, academic, media, and pedagogic publications, as well as on participant observation and interviews in two primary schools and among elite and middle class families in Shanghai, China. Drawing on rich, ethnographic data, this book debunks many popular and scholarly stereotypes about the predominance of Confucian ideas of parental authority in China or about the indifference to individual human rights in the political and public culture of the PRC. This book also recognizes the complexities and conflicts that exist in Chinese discourses about and practices toward children, as older ideas of filiality, neoliberal ideologies, and the new awareness of children's right to privacy, to expressing their views, and to protection against violence compete and collude in complicated, often contradictory ways.