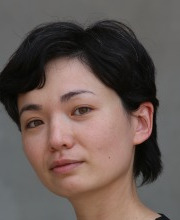 I received my Ph.D. in the Organization Studies, Department of Sociology and Anthropology at the Hebrew University of Jerusalem (2017). After completing my post-doctoral stays in Jerusalem, Berlin and Oxford, I am glad to come back to the Department of Asian Studies as the Chair of Korean Studies Program.

I work on South Korea's economic miracles, also known as "Miracle over the river Han" and cultural miracle, also known as "the Korean Wave" or Hallyu. My research interests include the image of Korea in the business world, technological innovation and espionage, soft power, creative cultural industries, fandom and more.

6. Frenkel, Michal, Lyan, Irina, and Drori, Gili S. (2015). Reproducing self and the other: The role of cross-cultural management discourse and training in shaping Israeli-Korean collaborations. In Routledge Companion to Cross-Cultural Management. Edited by N. Holden, S. Michailova and S. Tietze. London: Routledge, pp. 399-408.

At the Department of Asian Studies, I teach BA seminars on "Korean economic miracle" and "Popular culture in South Korea". I also teach mandatory courses: "Understanding North Korea"; "Pre-modern Korea", and "Gender and sexuality in Korean cinema and literature." In the past I managed two combined programs with Business Administration (2013-2017) and International Relations (2016-2017) coordinating guest-seminars with businessmen, diplomats, and academics - Forum of East Asian Economies and Asia in International Arena.