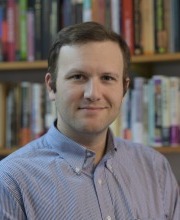 Dan Sherer is a historian of Pre-Modern Japan, with a focus on the Sengoku period (roughly the 15th and 16th century). His research interests are primarily how smaller political entities of the time functioned and how they interacted with the powerful warrior regimes that ruled and fought over Japan at the time. A graduate of the University of Southern California, Dr. Sherer has been a researcher at the Tokyo University Historiographical Institute and a visiting fellow at the Kyoto Institute, Library and Archives (KILA).

Dr. Sherer current project focuses on how the Kyoto temples of the Nichiren Buddhist sect survived the turbulent 16th century. This project utilizes the documents left behind by the Council of Head Temples, a governing body that allowed them to negotiate with the imperial court and powerful warriors as a unit, rather than temple by temple. This Council allowed them to see their way through one of the most violent periods in Japan’s history without taking up the sword themselves. Dr. Sherer has also published works on banditry and the history of Japanese conjuring.
Full-time lecturers, Japan Studies